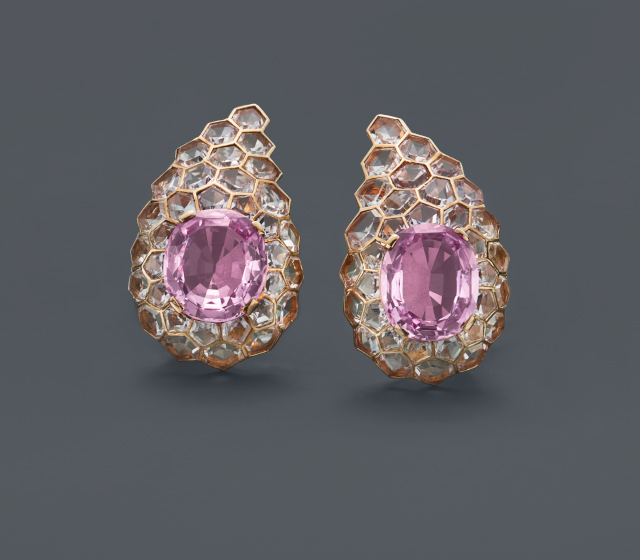 Where would today’s jewelry designers be without Suzanne Belperron? It is no exaggeration to call her the most influential woman of jewelry design. She has also been called elegant and audacious, her jewelry labeled both “brilliant” and “barbaric.” According to Karl Lagerfeld, an avid Belperron collector, “There’s no one else like her.” Designing during a time when men ruled the jewelry industry (and most other things), her success was no small feat.

Belperron joined the house of Bovin in 1919 at age 21, where her curvaceous designs deviated from the geometric expressions of the Art Deco movement. She pushed volume to the limit while maintaining a sense of refinement. Her influence at Boivin was so significant that it is sometimes difficult to differentiate between the pieces she created there and those she designed after she left the company.

In 1932, Bernard Herz, a Parisian stone dealer, invited Belperron to design for his maison, where she was given free rein. She created organic shapes such as petals, fruits and seashells, as well as Egyptian, African, Indian and Asian motifs. She daringly set precious stones in carved rock crystal, chalcedony and even wood—something no one else was doing at the time. Belperron chose materials for their beauty, not their value. Like her former mentor Jeanne Boivin, she refused to sign her pieces, stating, “My style is my signature.” Her name, nonetheless, gained fame as her pieces were featured in Vogue and Harper’s Bazaar and adorned the most fashionable women of the day, including the Duchess of Windsor, Princess Aga Khan, Daisy Fellowes, Diana Vreeland, Josephine Baker, Colette and Elsa Schiaparelli. She even made jewelry for Marie Munn, a blind pianist—a testament to the tactile sensuality of Belperron’s forms.

Bernard Herz was of Jewish origin, so Belperron took full control of the company in November 1940 to ensure its survival during the Nazi era. But in November 1942, she was arrested for concealing a Jewish business. During her transfer to the Gestapo headquarters in Paris, Belperron allegedly swallowed all the pages of Herz’s address book, one by one. Bernard Herz was arrested the same day at his home and sent to an internment camp, from which he sent a letter entrusting his and his children’s affairs to Belperron. Herz ultimately died at a concentration camp. Despite this tragedy, Belperron managed to maintain the business during the occupation. Her originality kept the firm on the cutting edge until her retirement in 1975.