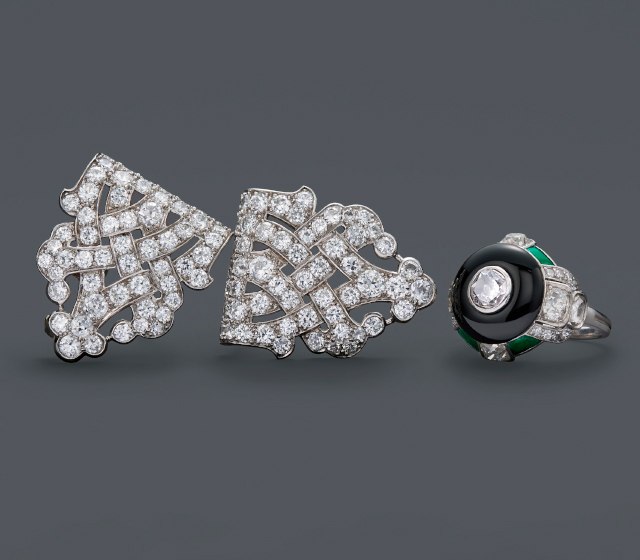 You could say that love and family are the reasons for Van Cleef & Arpels. In the late 1800s, Estelle Arpel, daughter of a precious stones dealer, fell in love with and married Alfred Van Cleef, son of a stone-cutter. The groom and his father-in-law opened a small jewelry business and Estelle’s brothers Charles, Julien and Louis came on board.

In the 1920s, Van Cleef & Arpels embraced the fervor for Far East designs with cherry blossom, pagoda and dragon motifs. They interpreted the Egyptian revival with Art Deco renditions of hieroglyphics and sphinxes, and created Indian-inspired pieces based on the house’s commissions for Sita Devi, the Maharani of Baroda. In keeping with the fashions of the time, Van Cleef & Arpels perfected the sautoir as well as the wide diamond bracelets that sparkled on newly-bared arms.

The following decades saw innovation after innovation. In 1933, Van Cleef & Arpels patented the Serti Mysterieux (Mystery Setting), placing gemstones flush against each other with no visible prongs. In 1934, when Charles Arpels saw socialite Florence Gould toss her lipstick and cigarettes into a tin Lucky Strike box, he had an epiphany. He created a small gold purse that held just the essentials for an evening on the town, and the Minaudière was born. In 1938, the Duchess of Windsor asked Renée Puissant, Alfred Van Cleef’s daughter and artistic director of the house, to design a piece based on the zipper. The necklace, crafted in round and baguette-cut diamonds mounted in platinum, was not produced until 1950. To this day it remains an icon, simultaneously elegant, whimsical and sexy.

With the outbreak of World War II, the Van Cleef and Arpels families, of Jewish lineage, were forced to leave Europe. They opened boutiques in Palm Beach and New York, and revealed an array of new designs influenced by their new world and culture. The company’s signature Ballerina clips were born in the early 1940s after Claude Arpels, the nephew of Estelle Arpels, befriended George Balanchine, the co-founder of the New York City Ballet. These exquisite pieces, along with blithe butterflies, fairies and flowers were seen as symbols of hope during the war. In 1954, Van Cleef & Arpels introduced playful animal clips inspired by cartoon characters to attract new customers—but even sophisticated connoisseurs like Grace Kelly and Jacqueline Kennedy Onassis snapped them up. The company’s famous four-leaf clover Alhambra design debuted in 1968. Princess Grace, who had appointed the company an Official Supplier to the Principality of Monaco, loved the collection and often wore several long necklaces dotted with inlaid quatrefoils.