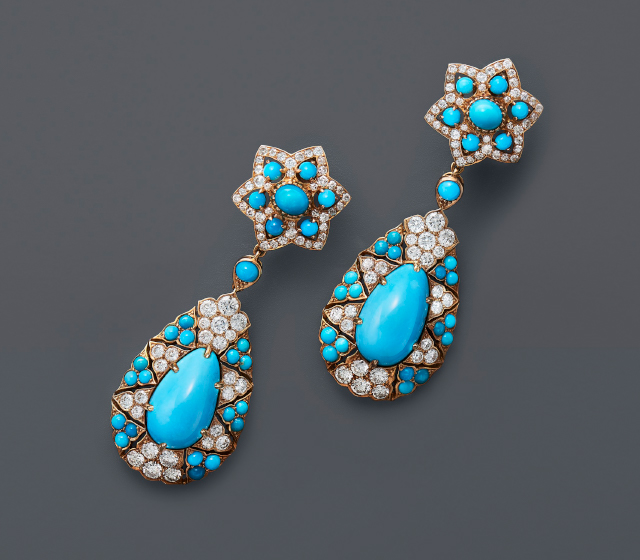 The 1950s were a decade of prosperity and with that came a return to femininity and glamour in fashion. Jewelry designs remained oversize, but were more open and textural than the chunkier styles that preceded them. Diamonds set in platinum were back en vogue. In fact, one of the era’s most indelible images is Marilyn Monroe, sheathed in fuchsia and dripping in jewelry, singing “Diamonds Are a Girl’s Best Friend” in 1953’s Gentlemen Prefer Blondes.

The dynamism of the 1960s was reflected in the bold, bright jewelry of the era. Picture the wide variety of styles depicted on Mad Men: colorful brooches, gemstone bib necklaces, pop art earrings. Opaque materials in vivid colors, such as coral and turquoise, mirrored the hues of the fashion world. Designers looked to Asia, India and Africa for inspiration; the result was a resurgence of gold as well as exotic, global themes. The important makers of the era include Van Cleef and Arpels, Bulgari, Cartier, David Webb, Jean Schlumberger for Tiffany, Harry Winston, Sterlé and Kutchinsky.

Bohemian style continued into the 1970s. Gold still ruled, and the favored gemstones were darker and more natural in color—shades of burgundy, deep blue and purple. By the end of the decade, punk style started to influence jewelers, and spikes and studs—think Cartier’s Juste un Clou—hit the scene.