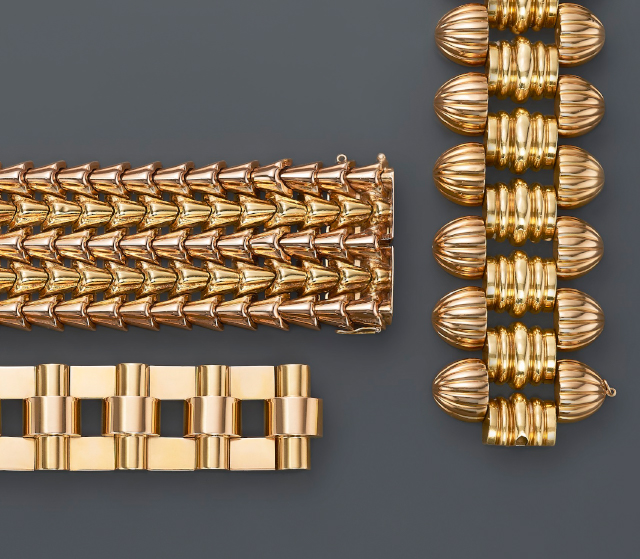 The term “retro” gets bandied about to describe all sorts of vintage fashion. But in the context of jewelry, Retro refers to the period of early Modernism that began in 1935, spanned World War II, and lasted through the mid-1950s. During the war and the Great Depression, as women began entering the workforce, clothing became simpler. In contrast to apparel’s thrift and severity, jewelry became bigger and brighter than it had been in decades, taking cues from Hollywood stars like Lana Turner, Joan Crawford and Lauren Bacall.

Styles ranged from feminine and romantic, with motifs like birds, flowers and seashells, to geometric and industrial (a sub-category known as Art Moderne), with patriotic and industrial expressions inspired by factory production lines and tank treads. Although the themes differed greatly, the unifying characteristic of Retro designs is that they are highly dimensional, rather than flat like their Art Deco predecessors. Platinum was reserved for the war effort, so gold—not only yellow, but rose and green, too—resurged in popularity. Amethysts, citrines and aquamarines took center stage in bold cocktail rings, and bracelets were especially important: oversize gold links exuded power, while charm bracelets were whimsical and romantic. Clip-on earrings were patented in 1934, which ignited a trend for earrings worn close to the ear.